You are here: Home / Information / Nembutal

Pentobarbital is in a group of drugs called barbiturates. Pentobarbital slows the activity of your brain and nervous system.

One brand name for this drug is Nembutal, best known as the only injectable form of pentobarbital used for executions of convicted criminals (USA) and for euthanasia of humans (high dose) and animals. 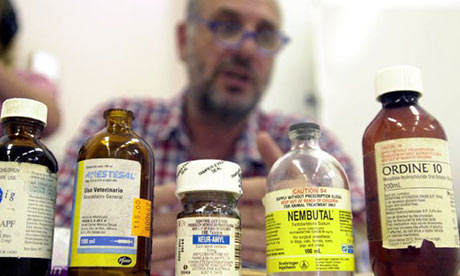 Nembutal drug promoted by euthanasia campaigners as a peaceful way to die is easily being illegally imported into Australia.

Known as the “peaceful pill”, barbiturate Nembutal is promoted by the euthanasia movement as the best and most peaceful way to end your life.

Most have bought the illicit drug online from China, a country that has come to dominate the market.

The drug kills within an hour of being consumed.

“I’ve been with a lot of people who have died using this drug, it just seemed to get into to a deeper and deeper sleep and then finally stop breathing.

“And for those watching they see this as the most peaceful of deaths, it certainly looks to be.

“Be careful, because it’s illegal.”

The penalty for importing or possessing Nembutal is a prison sentence or a fine of up to $825,000.

In Australia, it is illegal (import or possess) to purchase any form of Nembutal.

There are many reports of internet scams from Australian’s  who have lost hundreds of dollars trying to buy Nembutal online.

There are also major concerns about the quality of product coming from countries like China and Mexico.

Members of Peaceful Pill Handbook can access information about purchasing Nembutal online and strategies to help keep you safe.

If you or someone you know requires help you can contact Lifeline on 13 11 14, visit Beyond Blue or young people can visit Headspace.

Five Wishes - "Don't Wait Until it's Too Late" Initiative A conversation starter for everyone. To help people plan and have an influence on the end of their life... If you suddenly became seriously ill … END_OF_DOCUMENT_TOKEN_TO_BE_REPLACED

A private member’s bill that would clear the way for assisted dying to be legalised across Australia could be passed in the Senate this week, but may not be granted the lower house vote needed to pass into law. Prime … END_OF_DOCUMENT_TOKEN_TO_BE_REPLACED

A very sad story about a brave man that granted his fathers' final wish. Importantly: Despite chronic cancer and suffering pain, the father was ineligible for Victoria’s voluntary assisted dying program. Father: Colin Stratton Son: Glenn Stratton I CAN’T DO IT MYSELF A devoted son … END_OF_DOCUMENT_TOKEN_TO_BE_REPLACED

As legislative reform around voluntary assisted dying continues across the country, one woman recalls the complex issues that arose when her younger sister grew tired of life. ‘I want to go now’: why my witty, charming sister wanted to die MY SISTER Lisa moved into a hospice by Lake Burley … END_OF_DOCUMENT_TOKEN_TO_BE_REPLACED