In an exclusive interview with 60 Minutes reporter Tara Brown, West Australian based GP Alida Lancee is putting her reputation, her livelihood and – most importantly – her freedom on the line by identifying the patient who requested her help in assisted dying.

The never-before-made admission will most likely spark a police investigation and a possible murder charge. 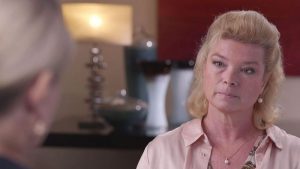 “I’m not wimping out now. I’m going to take this all the way,” she tells Brown, in a preview for tonight’s report.

“Deal with me as you see fit.”

Dr Lancee, a long-time campaigner for euthanasia, was investigated by police in 2016 over the death of one of her patients.

The investigation established that Dr Lancee’s patient had died naturally and that no wrongdoing was found.

But what police didn’t realise is that they were investigating the wrong patient.

Now, Dr Lancee has decided to set the record straight once and for all, in a brave bid to change Australia’s euthanasia laws.

“Right now, behind closed doors in Australia, hundreds of people are begging for help,” she tells Brown.

“This is no minor issue. This is not something that you can just say, ‘Oh, it’s not happening ’cause I can’t see it’.”

“If this requires a challenge in the court system, I have medical opinions who will back me up.”

The police investigation has seen Dr Lancee face very public scrutiny being labelled “Dr Death”, but as Brown reveals, she is not without support.

Dr Frank Kotai tells Brown he has assisted in half a dozen deaths.

And Dr Rodney Syme admits to a staggering 300.

It’s an admission that could land them in jail, but one they say is worth the risk if it results in their patients having control over the end of their lives.

“We recognise her courage and her enthusiasm,” Dr Kotai says.

“(Dr Lancee is) courageous enough to go out there in the public space.

“Not many doctors are willing to do it, and so she’s quite unique.”

In June 2019 new laws will make Victoria the only state in Australia where it is legal for doctors to assist terminal patients who seek their help to end their lives.

Dr Lancee, Dr Kotai and Dr Syme are hopeful that by airing their stories, Australians will support them in their campaign to allowing for an end of life choice.

Hearing from not only the doctors, Australians will see firsthand the perspectives of terminally ill patients and their families – those who have lost loved ones and been in the position of begging their doctors to assist.

Five Wishes - "Don't Wait Until it's Too Late" Initiative A conversation starter for everyone. To help people plan and have an influence on the end of their life... If you suddenly became seriously ill … END_OF_DOCUMENT_TOKEN_TO_BE_REPLACED

A private member’s bill that would clear the way for assisted dying to be legalised across Australia could be passed in the Senate this week, but may not be granted the lower house vote needed to pass into law. Prime … END_OF_DOCUMENT_TOKEN_TO_BE_REPLACED

A very sad story about a brave man that granted his fathers' final wish. Importantly: Despite chronic cancer and suffering pain, the father was ineligible for Victoria’s voluntary assisted dying program. Father: Colin Stratton Son: Glenn Stratton I CAN’T DO IT MYSELF A devoted son … END_OF_DOCUMENT_TOKEN_TO_BE_REPLACED

As legislative reform around voluntary assisted dying continues across the country, one woman recalls the complex issues that arose when her younger sister grew tired of life. ‘I want to go now’: why my witty, charming sister wanted to die MY SISTER Lisa moved into a hospice by Lake Burley … END_OF_DOCUMENT_TOKEN_TO_BE_REPLACED