You are here: Home / News / A bitter pill: Nembutal

Ray Godbold knows what a bad death looks like, and he does not want that for himself or his loved ones. And so he wants that little brown bottle on the table. He wants control. Dr Rodney Syme nods. He knows only patients can judge when suffering becomes insufferable. Dr Syme has been helping people in this situation for 25 years, by doing what he is about to do. He hands the bottle over. Assisted suicide Controversial doctor, dying patient ignite fresh debate

A small brown bottle of liquid sits on the table, positioned between the two men. The glass has no label, but both the patient and the doctor know what it holds.

The sick man calls it “control” and the urologist calls it “medication” , but the non-prescription substance has another name.

Nembutal was once a common sedative but is now more often used by vets to put pets to sleep. It is also the drug of choice for those who believe in the “right to die” – when physical pain and emotional misery become too much to bear. 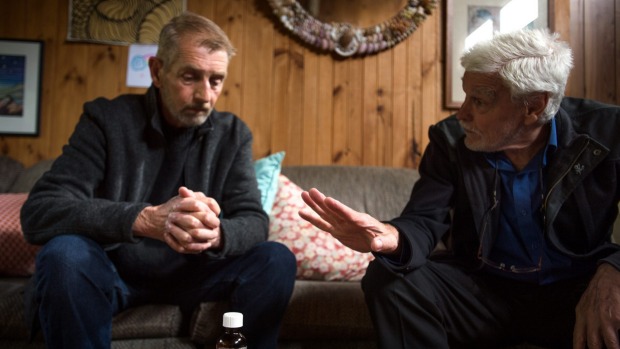 Ray Godbold, 59, wipes his runny nose and explains what has led him from his home in Inverloch to this Philip Island holiday shack, surrounded by chittering birds perched in coastal banksias.

He has come to meet with Dr Rodney Syme, 79, the controversial vicepresident of Dying with Dignity Victoria , to discuss the final stage of his life and his control over how those minutes unfold.

They first met here 12 months ago. Godbold had stage four gastroesophageal cancer, which had spread to his liver and lymph nodes. They kept in touch as the disease progressed. Now they are back.

Reasons for concern have been mounting. The cancer is taking more of his metabolism away, along with his appetite and energy. His pain and discomfort are growing, with dizzy spells and a few falls.

“I can tell – in myself – that the cancer will eventually . . .” he pauses, stopping to gather his thoughts. “I’m not as well as I have been.”

Both men know how his disease will progress from here.

Catastrophic events such as a heart attack, pulmonary arrest, embolism or severe bleeding are a risk. Liver failure and jaundice are a concern and, as the cancer spreads, cachexia or “wasting” .

Godbold spent 34 years as a nurse. As a midwife, he has been in the delivery room for the arrival of so many newborns, and he has also been present in homes and hospices as countless others have died in his specialist palliative care.

Godbold knows what a bad death looks like, and he does not want that for himself or his loved ones. And so he wants that little brown bottle on the table. He wants control.

Rodney Syme has been helping people in this situation for 25 years, by doing what he is about to do. He hands the bottle over. “That’s medication for you – some Nembutal,” he says. “You need to take that by mouth, and you will have total control of that. It’s not my intention that you take it. I hope you don’t need to take it. But if you run into a brick wall, then that is what I sometimes call the key to the fire escape.”

The two men shake hands and begin discussing the efficacy of what is, in effect, a black market substance . Nembutal is a “border controlled drug” , possession of which is a breach of law. Penalties range from imprisonment to fines of up to $825,000.

What both men are doing is taking a stand. They are mounting a public challenge to current laws that deny people the right to take their own life with the help of a doctor, through medication that can assist their passing in a peaceful and reliable way.

They expect a reaction. They want a debate – about what Dr Syme has already done for decades.

Paul Russell, director of HOPE, an organisation devoted to preventing euthanasia and assisted suicide, said it was “frustrating” that any doctor would supply patients with lifeending medication.

“Euthanasia is never safe,” he says.

The story of Ray Godbold creates an “impetus for change” , he says, but equally there are other stories that should create “cause for pause or thought” . In Victoria, it is a criminal offence to incite, aid or abet a suicide, with a maximum penalty of five years’ jail, yet no Victorian doctor has been charged with assisting suicide in the past 50 years.

Five Wishes - "Don't Wait Until it's Too Late" Initiative A conversation starter for everyone. To help people plan and have an influence on the end of their life... If you suddenly became seriously ill … END_OF_DOCUMENT_TOKEN_TO_BE_REPLACED

A private member’s bill that would clear the way for assisted dying to be legalised across Australia could be passed in the Senate this week, but may not be granted the lower house vote needed to pass into law. Prime … END_OF_DOCUMENT_TOKEN_TO_BE_REPLACED

A very sad story about a brave man that granted his fathers' final wish. Importantly: Despite chronic cancer and suffering pain, the father was ineligible for Victoria’s voluntary assisted dying program. Father: Colin Stratton Son: Glenn Stratton I CAN’T DO IT MYSELF A devoted son … END_OF_DOCUMENT_TOKEN_TO_BE_REPLACED

As legislative reform around voluntary assisted dying continues across the country, one woman recalls the complex issues that arose when her younger sister grew tired of life. ‘I want to go now’: why my witty, charming sister wanted to die MY SISTER Lisa moved into a hospice by Lake Burley … END_OF_DOCUMENT_TOKEN_TO_BE_REPLACED