You are here: Home / News / Last Cab to Darwin

Taking advantage of the controversial Northern Territory’s Voluntary euthanasia law Max decides to end his own life with dignity. His request under the law is in bitter dispute but Max sells up everything he owned, says goodbye to his neighbor and good friend Polly, and drives the great distance from Broken Hill, New South Wales to Darwin, Northern Territory where taking his own life would be legal.

Rex is a loner, and when he’s told he doesn’t have long to live, he embarks on an epic drive through the Australian outback from Broken Hill to Darwin to die on his own terms; but his journey reveals to him that before you can end your life, you have to live it, and to live it, you’ve got to share it.

Rex is on his way out.

The oncologist in Broken Hill has given him three months, but Rex would rather not wait around for the worst of it.

Meanwhile, 3000kms away up in Darwin, there’s a doctor who reckons she’s won the fight to legalise euthanasia. Rex doesn’t need to be told twice.

Within a couple of days he’s had his last cold Cooper’s with his mates, said goodbye to the dog and had an awkward and inconclusive farewell with Polly from across the street, who has shared Rex’s front porch and bed for years.

Funny thing though, even though half the town know that Polly and Rex are an item, she still can’t hold his hand in public or drink a beer with him at the local bar. Because while Rex is white, Polly is Aboriginal. And even in the mid-1990s, in small town Australia that would have caused more trouble than either of them wanted.

Against that backdrop – still kind of shocking seen from our side of the ditch – Rex loads up his yellow cab and hits the track. “I’ll be there in four or five days, I reckon,” he tells the Doc. And so a road movie, a well-drawn drama and an occasional comedy of larrikins under stress is underway.

In the lead, Aussie stalwart Michael Caton (The Castle) pulls out a performance for the ages. Caton’s Rex is a perfectly realised creation – craggy, dignified, vulnerable and leather-skinned in equal measure. Next to Caton, Mark Coles-Smith, Emma Hamilton and – especially – Ningali Lawford all turn in some fine work as Rex’s companions and care-givers. Though Hamilton’s alleged London accent does skip around the boroughs seemingly at random.

In Darwin, the redoubtable Jackie Weaver (Animal Kingdom) is waiting to receive Rex. Oddly, it seems at first that Weaver is the weakest link in the cast. But, by the time we meet her, the occasional contrivances that drive Last Cab To Darwin have piled up to a point that can no longer be ignored and Weaver gets thanklessly left to sell the pivotal points that usher in the film’s slightly strained third act.

But I reckon long before you notice the welds in the screenplay, Last Cab to Darwin will have won you over as it did me.

Co-writer/director Jeremy Sims (Beneath Hill 60) and writer Reg Cribb (adapting his own stage play) have crafted a little cracker here.

In its best moments – and there are many of them – this is an exceptionally warm, funny, touching and human film. Recommended. 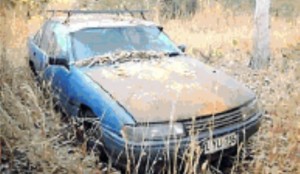 The real last cab to Darwin is slowly disappearing in an overgrown yard owned by Dr Philip Nitschke.

Euthanasia campaigner Dr Philip Nitschke, who was with Bell when he died, has owned the car since.

“He left it to me, ‘To help to get the euthanasia law working’,” he said.

“It became the Exit campaign car for the next 10 years till it finally died in Darwin with a failed welch plug. It still has the taxi meter in it, along with the length of chain under the seat that Max told me he used when people decided they didn’t want to pay the fare”.

A very sad story about a brave man that granted his fathers' final wish. Importantly: Despite chronic cancer and suffering pain, the father was ineligible for Victoria’s voluntary assisted dying program. Father: … END_OF_DOCUMENT_TOKEN_TO_BE_REPLACED

Five Wishes - "Don't Wait Until it's Too Late" Initiative A conversation starter for everyone. To help people plan and have an influence on the end of their life... If you suddenly became seriously ill … END_OF_DOCUMENT_TOKEN_TO_BE_REPLACED

Over 70 per cent of Australians support the legalisation of voluntary euthanasia. Despite this overwhelming backing, there is still no law. In fact, the issue has been voted down 13 times in the South Australian … END_OF_DOCUMENT_TOKEN_TO_BE_REPLACED

A very sad story about a brave man that granted his fathers' final wish. Importantly: Despite chronic cancer and suffering pain, the father was ineligible for Victoria’s voluntary assisted dying program. Father: Colin Stratton Son: Glenn Stratton I CAN’T DO IT MYSELF A devoted son … END_OF_DOCUMENT_TOKEN_TO_BE_REPLACED

As legislative reform around voluntary assisted dying continues across the country, one woman recalls the complex issues that arose when her younger sister grew tired of life. ‘I want to go now’: why my witty, charming sister wanted to die MY SISTER Lisa moved into a hospice by Lake Burley … END_OF_DOCUMENT_TOKEN_TO_BE_REPLACED

December 2020 - Madrid: Spain is on the brink of legalising euthanasia after a parliamentary vote that has riled right-wingers and the Catholic Church. A bill backed by the leftwing coalition government and several other parties was passed by 198 votes to 138. The main opposition conservative … END_OF_DOCUMENT_TOKEN_TO_BE_REPLACED