You are here: Home / News / Plan Ahead | Don’t Wait Until It’s Too Late

A Melbourne healthcare provider has become the national distributor of a unique end-of-life document that invites people of all ages to identify their emotional, spiritual and medical preferences in the event that they can no longer speak for themselves. 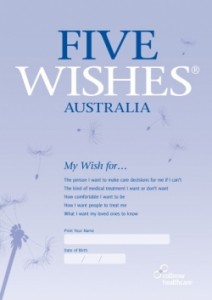 Succinct and narrative in style, Five Wishes Australia is accessible to anyone over the age of 18.

With no affiliation to any public hospital, Five Wishes is a bipartisan advance care directive that enables perfectly healthy people to protect themselves if and before chaos strikes.

Wendy herself was diagnosed with breast cancer in 2011.

“It would have been great at the time if I had already appointed my medical substitute decision maker so I could focus on getting well.”

Now recovered, she has no need for Peter MacCallum paperwork, but still wants her best interests protected in the event of a car accident, for example.

She said technology and science has progressed to a point where medicine can significantly prolong life.

But just because it’s possible, is it right for the individual?

Five Wishes makes that the patient’s prerogative, ensuring their beliefs are represented in the kind of treatment they receive.

This includes “yes” or “no” tick-box considerations like, “I wish to have close family and/or friends put some make-up on me to maintain my appearance.”

“Something like this could mean the world to someone who has been very particular about their appearance all their life, but others couldn’t care less,” Ms Miles said.

Five Wishes has also become the first advance care directive in Australia to raise the issue of social media.

As well as protecting someone in a seriously ill state, Five Wishes is also instructive to their family and loved ones.

Ms Miles remembers one woman whose dying husband had documented in his Five Wishes that he wanted to be surrounded by pictures of his family.

“When the staff moved the pictures onto a higher shelf, the wife was able to bring them down again knowing that was what he wanted.

“It gave her a way to help him, when otherwise she might have felt helpless.”

Ms Miles said she hopes the launch of Five Wishes will generate conversations that allow people to stay in control all of their life.

“It can give people a voice when they no longer have one.”

A very sad story about a brave man that granted his fathers' final wish. Importantly: Despite chronic cancer and suffering pain, the father was ineligible for Victoria’s voluntary assisted dying program. Father: … END_OF_DOCUMENT_TOKEN_TO_BE_REPLACED

Five Wishes - "Don't Wait Until it's Too Late" Initiative A conversation starter for everyone. To help people plan and have an influence on the end of their life... If you suddenly became seriously ill … END_OF_DOCUMENT_TOKEN_TO_BE_REPLACED

Over 70 per cent of Australians support the legalisation of voluntary euthanasia. Despite this overwhelming backing, there is still no law. In fact, the issue has been voted down 13 times in the South Australian … END_OF_DOCUMENT_TOKEN_TO_BE_REPLACED

A very sad story about a brave man that granted his fathers' final wish. Importantly: Despite chronic cancer and suffering pain, the father was ineligible for Victoria’s voluntary assisted dying program. Father: Colin Stratton Son: Glenn Stratton I CAN’T DO IT MYSELF A devoted son … END_OF_DOCUMENT_TOKEN_TO_BE_REPLACED

As legislative reform around voluntary assisted dying continues across the country, one woman recalls the complex issues that arose when her younger sister grew tired of life. ‘I want to go now’: why my witty, charming sister wanted to die MY SISTER Lisa moved into a hospice by Lake Burley … END_OF_DOCUMENT_TOKEN_TO_BE_REPLACED

December 2020 - Madrid: Spain is on the brink of legalising euthanasia after a parliamentary vote that has riled right-wingers and the Catholic Church. A bill backed by the leftwing coalition government and several other parties was passed by 198 votes to 138. The main opposition conservative … END_OF_DOCUMENT_TOKEN_TO_BE_REPLACED