Sadly Ray has passed away.

Good on you Ray!  Hold that head high, your body may have let you down but not your mind.

You taught us all that the end is not easy, its not black and white.

You taught us dignity and opened our eyes. 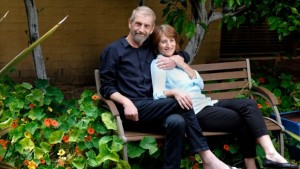 The family sat together at the kitchen table in Inverloch, sad but smiling, and ready to speak about Raymond Grant Godbold, who died a week ago.

It was here, after all, that the professional palliative care nurse and amateur gourmand had served them so many meals in his 59 years. He would present his wife, Robyn, and children Tara, Ella and Rory with pappadums and dhal, a delicate Florentine, or some other dish made with his favourite simmering base of oil, garlic and chilli.

Ray, a Dying with Dignity campaigner , was comfortable talking about the end. He did so several times in the pages of The Age, including publicly revealing that he had sourced the illegal and lethal drug Nembutal.

He spoke to anyone who would listen to his plea that our laws around end-of-life choices need to change. Now his family takes up that cause.

The final month had been tough on Ray, they said. Suffering from terminal gastroesophageal cancer, he could barely eat – let alone cook. A chest infection had floored him, leaving him at times delirious and distressed. He would have clarity one moment then be spun into confusion the next.

In a ‘‘ hidey hole’’ , he had his lifeending medication, procured from controversial urologist Dr Rodney Syme, but while he remained lucid and loved he saw no need to bring out that brown glass bottle.

‘‘ It’s hard,’’ Robyn said. ‘‘ As much as you talk about it and reason out the process intellectually, ending your life – it’s hard.’’

Ultimately, Ray’s final few days provided another example of the flawed system he wished to challenge . On August 12, the day before he slipped away, he decided to end his life. ‘‘ Give it to me,’’ he said. ‘‘ Get it for me. I’m ready.’’

But the medication is bitter, the dose large, and he was already struggling to keep down liquid or food. What he wanted and what he was capable of were incompatible.

What his grieving family want now is to see people in his position have more choice. Could there have been an intravenous solution?

‘‘ We know it’s not a simple thing,’’ said Tara, his eldest. ‘‘ It’s not black and white, and all situations are different. What we want is choice and control. For him. For us. For everyone.’’

A very sad story about a brave man that granted his fathers' final wish. Importantly: Despite chronic cancer and suffering pain, the father was ineligible for Victoria’s voluntary assisted dying program. Father: … END_OF_DOCUMENT_TOKEN_TO_BE_REPLACED

Five Wishes - "Don't Wait Until it's Too Late" Initiative A conversation starter for everyone. To help people plan and have an influence on the end of their life... If you suddenly became seriously ill … END_OF_DOCUMENT_TOKEN_TO_BE_REPLACED

Over 70 per cent of Australians support the legalisation of voluntary euthanasia. Despite this overwhelming backing, there is still no law. In fact, the issue has been voted down 13 times in the South Australian … END_OF_DOCUMENT_TOKEN_TO_BE_REPLACED

A very sad story about a brave man that granted his fathers' final wish. Importantly: Despite chronic cancer and suffering pain, the father was ineligible for Victoria’s voluntary assisted dying program. Father: Colin Stratton Son: Glenn Stratton I CAN’T DO IT MYSELF A devoted son … END_OF_DOCUMENT_TOKEN_TO_BE_REPLACED

As legislative reform around voluntary assisted dying continues across the country, one woman recalls the complex issues that arose when her younger sister grew tired of life. ‘I want to go now’: why my witty, charming sister wanted to die MY SISTER Lisa moved into a hospice by Lake Burley … END_OF_DOCUMENT_TOKEN_TO_BE_REPLACED

December 2020 - Madrid: Spain is on the brink of legalising euthanasia after a parliamentary vote that has riled right-wingers and the Catholic Church. A bill backed by the leftwing coalition government and several other parties was passed by 198 votes to 138. The main opposition conservative … END_OF_DOCUMENT_TOKEN_TO_BE_REPLACED